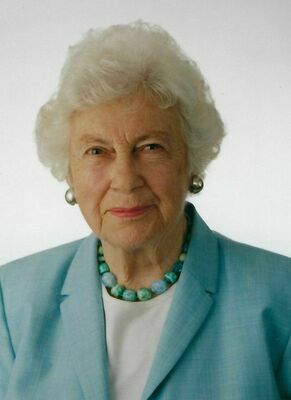 Cay was born April 10, 1920 in Quincy, Illinois, the daughter of Frederick Boyd and Edith Govert Castle.

Mrs. Barnum attended Madison School for all nine years of her elementary education. She graduated from Quincy Senior High School in 1937. Cay received her Bachelor of Arts degree from the University of Illinois, Champaign-Urbana in 1941. While attending U of I, she was a member of the Kappa Alpha Theta Sorority and became involved with campus politics. After their marriage in 1942, Cay and Frank lived briefly in Washington, D.C. When Frank went to sea with the U.S. Navy during World War II, Cay returned to Quincy and actively worked with various projects associated with the war effort.

Cay always served on her high school class reunion committees. In recent years, she mentored children at Madison, Washington and Adams Schools. As a girl, Cay spent her summers at girls camps. She loved to travel. She always loved the great outdoors and took immense pleasure in raising beautiful roses, zinnias and pussy willows.

She lived in LaGrange, Missouri at Windy Hill before returning to Quincy.

She is survived by her daughter, Catherine 'Cathy' Randall and her husband Robert, of Jacksonville, IL; and numerous cousins.

She was also preceded in death by her parents.

A private prayer service will be held at St. John's Anglican Cathedral followed by burial in Woodland Cemetery, Quincy, Illinois. A public Requiem Mass will be planned at a later date.

Memorials: National Federation of the Blind of Illinois (NFBI) or St. John's Anglican Cathedral (3728 Payson Road). Memorial donations may be made online at https://memorials.hansenspear.com/