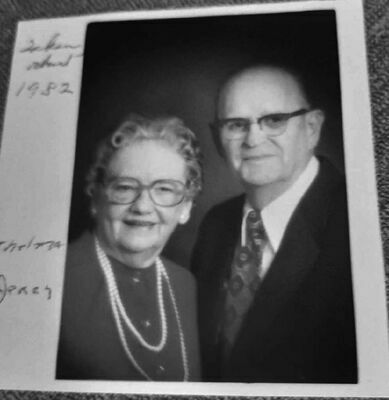 Thelma (Schroeter) Ball was very notable also. She graduated from Kirksville State Teachers College in 1929, taught at Ewing until 1932, Married Jerry Ball in 193. She resumed teaching high school from 1946 through 1970. She was the principal at Ewing school for many years and was the last principal when the schools consolidated in 1970. She was the class sponsor and accompanied the seniors on many trips throughout the United States.

She was the editor of The History of Ewing, 1776-1976, A Small Town in Lewis County, which is a very detailed account of the families, businesses and buildings in and around Ewing. The book has become a reference for many people researching genealogy and history. She and her husband Jerry also complied the information for the publication of A History of Ewing Schools, 1867-1970. She was a member of the Daughters of the American Revolution and a charter member of the Lewis County Historical Society. Among her awards and honors, she received The Missouri State Genealogical Association Award of Merit

Mrs. Ball made a deep impact on the town of Ewing and Lewis County. She was a beloved figure at Ewing School. She always kept in contact with students long after they had graduated and enjoyed hearing about their success. She enjoyed talking about and researching the history of the area. She is remembered fondly by her former students. Her daughter, Judy Ball Leach and her husband Nolan, reside in Ewing. Mrs. Thelma Ball passed away in 2002.