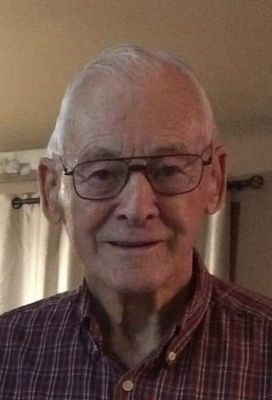 Walter Lee Adams, 92 of rural Lewistown, Missouri passed away peacefully in his home. Walter went to heaven to be with his beloved wife Thelma on their 70th wedding anniversary, March 26, 2020. She finally said to Walter, “Clyde are you coming or not?”

The son of Delmar and Iva Hamilton Adams was born on August 27, 1927 at Lewistown, Missouri.

He was united in marriage to Thelma C. Daggs on March 26, 1950 at the Mt. Olivet Church in rural Ewing, Missouri. She preceded him in death on December 7, 2005.

Walter was a member of the Mt. Olivet Baptist Church. He served in the U.S. Marine Corps during the Korean War and worked for OATS Transit for over 25 years. He volunteered for the Lewis County Ambulance, Meals On Wheels, Lewis County Fair, 4-H and FFA. He was also a Bojac Seed Dealer.

He was preceded in death by his parents, wife and sisters, Catherine Bringer and Ica Feldkamp.

A Celebration of Life with family and friends will be held at a later date at the Mt. Olivet Baptist Church.
Memorials may be made to the Mt. Olivet Cemetery or the American Lung Association.