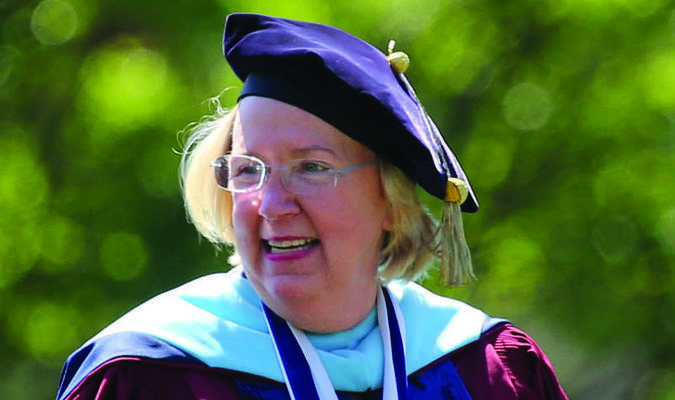 Dr. Kelly M. Thompson, retiring president at Culver-Stockton College, will be the speaker at Culver-Stockton’s 164th commencement at 11 a.m. on Sunday, Oct. 25 on the Quad. Approximately 220 graduate candidates will be welcomed back to campus to receive degrees during the formal ceremony.

Commencement originally was scheduled for Saturday, May 16, but it was postponed because of the COVID-19 pandemic. The ceremony now will be a part of homecoming weekend, which begins Friday, Oct. 23 with the Alumni Honors Banquet and the Blue and White Mixer.

Thompson said she discussed with the Senior Leadership Group a number of proposed dates for a rescheduled commencement.

“Then we decided to survey our seniors and ask what they thought, and more than half of them agreed that they would love to come back for homecoming weekend,” Thompson said. “It’s always such a wonderful weekend with the parade and the football game.”

Thompson added that their survey revealed that more than half of the students would bring eight people or more to the Oct. 25 ceremony.

President-elect Dr. Doug Palmer, who begins his duties on July 1, 2020, said he will allow Thompson to be “president for the day.” She will confer the degrees and congratulate students as they come across the stage.

“Clarke and I will do everything in my power to be here for that weekend,” she said.

The Senior Dinner for the Class of 2020 will be on the evening of Saturday, Oct. 24 in the Dining Hall at the Gladys Crown Student Center. A dedication of the Wildcat Plaza is scheduled for that night as well. The plaza, located between the Gladys Crown Student Center and the Carl Johann Memorial Library, will serve as a gathering area for students. A groundbreaking for the plaza is scheduled for the end of June.

Funds for the plaza were raised as part of the annual senior class challenge, created in 2011 by Ron Leftwich ‘64, chairman of the Board of Trustees, and his wife, Susie. The Leftwichs match every dollar donated by the senior class toward a gift to the College. The wildcat statue that was the gift of the Class of 2017 will be the centerpiece of the new plaza.

Thompson, the 26th president in Culver-Stockton’s 167-year history, is retiring on June 30, 2020. She has led the college for six years and was the first woman president of the college.