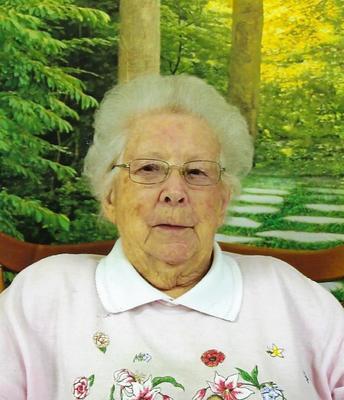 The daughter of Luther and Cora Batschelet Marks was born on July 24, 1922 in rural Canton, Missouri. Her early years were spent growing up during the Depression where she learned to be frugal and prudent. She went to school at Hazel Grove grade school and later to Canton High School. She then graduated from Gem City Business College.

She was united in marriage to Howard J. (Shorty) Ellison on February 14, 1943 at St. Joseph’s Catholic Church in Canton. He preceded her in death on December 26, 2006. They raised one daughter and two sons. She was the epitome of a farmer’s wife – gardening, canning, cooking and baking, gathering eggs, tending cattle, swine, chickens, and numerous farm dogs and cats. Later she worked for many years as a cook at Canton R-V and was an Assistant Caregiver at Lewis County Nursing Home in the Special Care Unit.

Doris was a member of the Better Homes Extension Club, a 4-H leader in the Pink Prairie 4-H club, a volunteer in many roles (especially checking in Horticulture exhibits) at the Lewis County Fair, was on the Board of Directors at the Canton Senior Housing and was a member of the Immanuel Methodist Church. She was also an avid competitor in card games, board games and other activities. She loved to read books and listen to music. Most recently she especially enjoyed the organ music at Country Aire Retirement Estates.

Memorials may be made to Country Aire Retirement Estates Activities Department which may be left at or mailed to Arnold’s Funeral Home, 1100 White St., Canton, MO 63435.