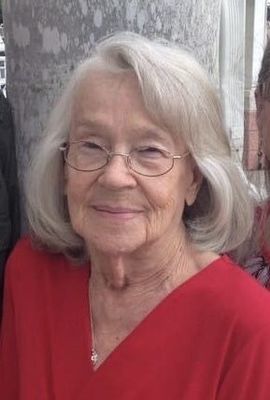 Edna Lee (Benner) Olson, 93, of Ewing, Missouri, died August 17, 2020 at Country Aire Retirement Estates in Lewistown, Missouri. She was born on April 12, 1927, in Lewis County to Emma Jane (Rockenfield) and James Elias Benner. She was the youngest of seven children; sisters Eva, Minna, Sarah, and brothers (John) Joel, James, and (Robert) Bob. Edna met the love of her life, Claude Olson, at a basketball game and they married June 4, 1944 in La Grange, Missouri. Claude and Edna celebrated their 75th wedding anniversary in June 2019, prior to Claude’s passing on June 20, 2019.
Edna was a long standing member of the Ewing Assembly of God Church. Growing up in Lewis County, she met her soulmate, Claude, at a young age. After they married, she traveled with him when he enlisted in the U.S. Army. Edna and Claude lived in Texas and California while Claude completed training. She lovingly supported him as he shipped out with the US Army during World War II. While living in Ewing, she worked at Irene’s Cafe, later working at Moorman’s and retired at the age of 57. She enjoyed traveling, camping and RVing across the Southwest, but especially loved Colorado, Texas, Florida, Arizona, visiting National and State Parks as well as visiting horse racetracks. She and Claude began wintering in Florida in the Fall of 1989. When at home or relaxing, Edna enjoyed birdwatching from her kitchen window, preparing delicious meals and desserts for her family, completing complex crossword puzzles, a good game of scrabble and lovingly doting over her children, grandchildren, and great grandchildren. Edna never met a stranger. She always shared a sweet smile and gentle hello. Her love of Christ and faith in the word of God was evident in how she lived her life. The way she loved and served others made for a lasting impression upon anyone she ever met.
Left to honor Edna and remember her love are her four children: Michael Olson of Quincy, Illinois, Pamela McDonald (Garry) of Port Charlotte, Florida, Marlene Musick (David) of Austin, Texas, and Christopher Olson of Austin, Texas; seven grandchildren: Gregg Bennett (Karen) of Fresno, California, Brandon McDonald of Port Charlotte, Florida, Erika Musick of Austin, Texas, Brooke Dawson (Jordan) of Edmond, Oklahoma, Brian Olson of Quincy, Illinois, Corey Musick of Austin, Texas, and Brock McDonald of Port Charlotte, Florida, six great grandchildren, and many nieces and nephews.

She was preceded in death by her loving husband, her parents, her five siblings, a son, Donald Olson, and a daughter, Claudette (Olson) Bennett.