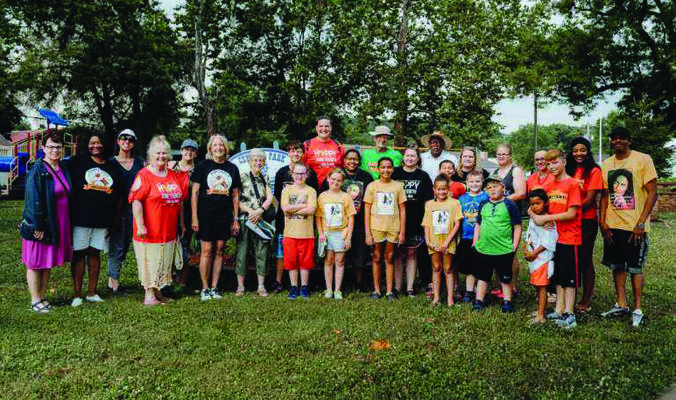 A Juneteenth Celebration was held in Canton on June 19. Juneteenth recently became a federal holiday. Although President Lincoln declared the Emancipation Proclamation in 1863, slaves in Texas were not freed until Federal Troops reached Galveston, Texas and issued General Order No. 3 on June 19, 1865, which marked an official date of emancipation. The Juneteenth event in Canton was organized by Phyllis Dean. The event began in Central Park. Tours of the sites of former African American Schools were given, including the restored Lincoln School. Participants could write freedom notes to put in balloons for a balloon release. Mrs. Dean shared her note that said, I will always speak the truth even when it makes myself or others uncomfortable. This is Freedom.” Pictured are a group that participated in the freedom walk and the balloon release. Second row: Two veterans share stories and memories; Angela Williams tellng the story of Juneteenth, W.T. Johnson as Harriet Tugman; Carol Rager and Arieah Dean on the Freedom walk. Story time also included Phillip Davis who had a grandmother that survived the Tulsa, Oklahoma massacre. Bottom row: Arieah Dean helps Esa put his Freedom note in a balloon as Phyllis Dean watches. Melva Clay with walking with a Juneteenth t-shirt. All ages participated in the Freedom walk. The event ended in Martin Park with music and fireworks. (Photos courtesy of Matchless Photography, Matt Parker)