Thank You ‘BERRY’ Much

by By Rita Cox 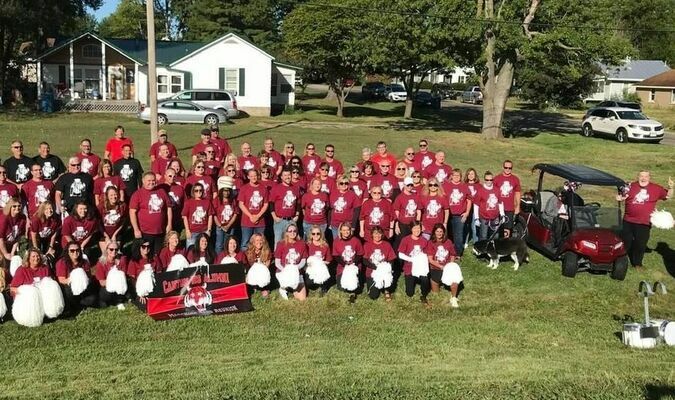 Stacey Zahn Thompson attended a Culver-Stockton parade a few years ago and ran into Mr. Bill Berry, former Canton Band Director, who was sitting in his usual parade spot in front of the Janney Store on Lewis Street in downtown Canton. Stacey had the idea that it would be great to march in the Culver parade again, but Mr. Berry told her he didn’t think he would be able to walk the route. That’s when Dixie Janney spoke up and said, “You shall ride in a golf cart,”. So Stacey put the plan in motion.

Covid put last year’s parade on hold, but once they found out that the 2021 parade would happen, Stacey started planning and the idea snowballed. Many former band members wanted to honor Mr. Berry and his wife, Lois. Stacey Thompson lived for many years in Alaska, and moved back to the area a few years ago. After seeing Mr. Berry at the parade, her dream was to march again in the Culver parade and many of the former band members helped to make that dream come true.

The Canton band, under the direction of Mr. Berry for almost three decades, was known as one of the best bands in the area. The won several parade and competition awards over the years. Students remember Mr. Berry as a great teacher and someone that cared about his students. His wife, Lois, was always a supporter of the kids and always there to lend a hand in whatever the band members needed. He was a mentor to many and established lifelong work ethic and commitment to his students that helped them succeed in their post high school years.

Thompson began contacting former members, had a facebook page dedicated to the event and the word spread. She ordered pom poms, they made the drum major staffs, they ordered shirts and planned for a rehearsal the night before the parade. They discussed how this would be accomplished. They didn’t play instruments, but they were doing the arm swing and the poms would do a routine, while walking to a drum cadence. She was amazed of all the support and the willingness of the band members. They rehearsed on Friday night with Mr. Berry at Ayers parking lot, and just like many decades ago, people driving by began to stop and watch, vehicles waited patiently as they practiced their signature (and difficult) corner turn. Others begin to show up and watch. Thompson said a lot of things have changed over the years, and it was much easier for the grown ups to take directions than it was when they were kids. The drum majors were very helpful. The drum cadence was to be recorded, and with the help of the current Canton band director, Ethan Thomas, they used the Canton band drums and recorded a cadence. The drummers didn’t like the recording and decided they would march with drums. Mr. Thomas lent them two snares and a bass drum for the parade which added an extra touch of excitement to the march.

During the rehearsal, KHQA, presented Mr. Berry with the Hometown Hero Award, for his dedication to the community and the influence he has had on so many lives.

The day of the Culver-Stockton Homecoming parade began with a nice sunny fall morning. There was a lot of excitement in the crowd looking forward to seeing the alumni march.

Thompson said she appreciates everyone who participated and all who helped in any way. There were many comments about how well it went and how some were sore from the march. The group will plan on marching in next year’s parade. All former band members are welcome to participate.

Stacey Thompson said her heart swelled with pride as she marched through the streets of Canton to the cheers of the crowd, but what was even better were all the cheers for Bill and Lois Berry. It was a great small town moment.