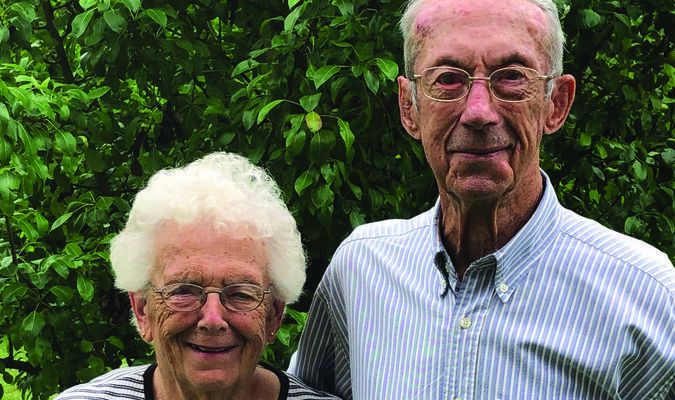 Joe and Waneta Stevenson of Canton, Mo., will celebrate their 65th wedding anniversary on July 7, 2022. They were married at St. Paul’s United Church of Christ in Kahoka, Mo., on July 7, 1957.

The Stevenson’s are the parents of one son, Joseph M. Stevenson of Crystal Lake, Ill., and one daughter, Joan M. Travert of Battlefield, Mo. Joe and his wife, Beckie, have two daughters, Lexi and Tori of Deerfield Beach, FL. Joni and her husband, Randy, have two sons, Kyle and his wife, Melissa, of Springfield, Mo., and Ryan and his wife, Aimee, of Meridianville, AL., and their sons, Hayden and Heath.

Mr. Stevenson was a teacher and coach at Williamstown and LaGrange, Mo., and Aledo, Il. In 1968 they purchased the Western Auto Store in Canton, Mo., and owned and operated it until semi-retiring in 1994. Mr. Stevenson then drove a school bus for Canton R-V. Mrs. Stevenson worked for the Bank of Monticello in Monticello, Mo.

For several years they hosted Happy Time Pre-School students, giving horse rides on Annie, Fox and Freckles, to the students. They also gave a demonstration of quail hunting with their English setters, concluding with cookies and juice drinks.

They are members of the Immanuel United Methodist Church Canton, Mo., where their children will host a reception in the Fellowship Hall on July 2, 2022 from 2 to 4 p.m. Family and friends are invited. The couple requests no gifts.