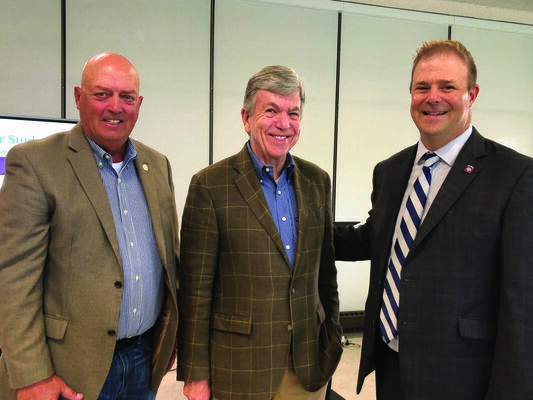 U.S. Senator Roy Blunt spoke at the Johnson-Turner IDEA Center on the Culver-Stockton Campus in Canton on October 12. Many community members and officials, Culver-Stockton Staff, students and other guests attending the luncheon.

Strengthening critical infrastructure. Sen. Blunt supported the Infrastructure Investment and Jobs Act to strengthen one of Missouri’s greatest competitive advantages: location. As a hub for the nation’s highways, railways, and waterways, Missouri is expected to receive around $8 billion from the IIJA, including around $6.5 billion to improve the safety and efficiency of highways, and additional funding to improve airports and waterways. The law reforms the permitting process to speed up construction projects and will shorten the government approval process for large infrastructure projects. Blunt remarked how Lewis County is fortunate to be bordered by the Mississippi River.

Expanding Rural Broadband. Blunt has worked to close the digital divide that has left about one-third of rural Missourians without access to broadband. As a member of both the Senate Commerce and Appropriations Committees, Blunt advocated for the ReConnect Pilot program to target federal investment toward areas that currently lack access to broadband, while preventing overbuilding existing infrastructure. The ReConnect Program has provided nearly $200 million in funding to Missouri since 2019, amounting to almost 10% of all the support provided nationwide, and the most any state has received since the start of the program. Missouri was also awarded $42 million from the National Telecommunications and Information Administration Broadband Infrastructure Program, the largest state-wide award from that program, representing more than 15% of total funding available. This award will be paired with $400 million in federal funding that Missouri has allocated toward broadband investment. The Blunt-backed Infrastructure Investment and Jobs Act (IIJA), which was signed into law in November, included an additional $65 billion to support broadband access, with Missouri estimated to receive at least $1 billion.