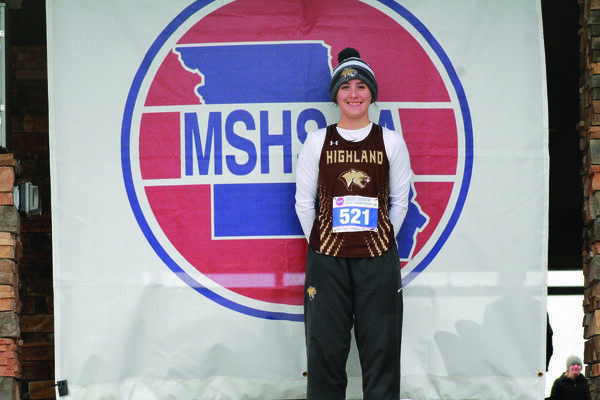 Kaycie Stahl after the race in front of the MSHSAA sign.

Kaycie Stahl traveled to Gans Creek in Columbia Nov. 5. to represent the Highland Cross Country team at the Class 2 State Championships. She entered the race with a personal record of 22:07 in the 5k, which was ran on the very same course as the State Championship race earlier this season at the Brian T. Simpson Invitational. Stahl was projected to finish 63rd at the state meet.

Arriving on Friday to run a practice on the state course, Kaycie experienced temperatures around 80 degrees the night before the meet. On the morning of the Girl’s Class 2 State race, which was scheduled for 9am as the first race of the day, Kaycie arrived at the course where it was a frigid 43 degrees outside. To make matters worse, the wind speed was at 26 mph and the sky was completely overcast. At least it wasn’t raining – YET!

The Highland Coaches huddled around Stahl and provided advice and encouragement. Coach French said, “Remember, you have trained all year for this. You are tougher than most and there will be some runners who falter in these temperatures and wind. You’ve got this!” Stahl replied, “I’m ready.”

No more than three-quarters of mile into the 5k race rain began to spit. The misty, windy, and cold conditions would continue for the duration of the race, but Coach French was dead on with his prediction. Kaycie Stahl represented Highland Cross Country and the community very well as she finished in 55th place overall and ran a time of 22:28 in the terrible race conditions, which was extremely close to her PR and 8 places better than her projected finish. Coach French said, “She passed 5 runners in the last 1000 meters - we couldn’t be prouder of Kaycie! She has worked hard and improved from year to year and throughout every season. If she can maintain the same type of improvement going into next year, I think we will see her on the podium recognized as an All-State runner during her Senior year!” Congratulations Kaycie Stahl!