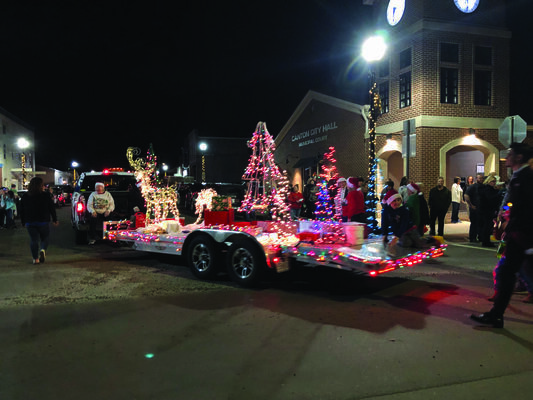 The Canton Main Street Association is hosting Canton’s 13th Annual Parade of Lights on Thursday, December 1, 2022. This year’s parade theme is “Frosty the Snowman”.
The evening will start at 5:30 pm with the lighting of the City tree in Central Park. Included at the tree lighting will be free hot dogs and hot cocoa, a bonfire, and music presented by Canton R-V School’s elementary students, Culver-Stockton College A Cappella students, and Culver-Stockton College’s Saxophone Quartet.

Parade time is at 6 pm. The Parade route will start at 4th and Montgomery Streets, going west through the Canton Senior Housing. It will continue to 7th Street, turn north and, crossing Washington Street, will follow 7th Street to Clark Street. The parade will turn right on Clark Street and at 4th Street the parade will turn right. At Lewis Street the route makes its final turn to the right, ending near the Canton Public Library where Santa will greet the young and young at heart.

Parade entries will compete in two categories, Business and Non-Profit. In each category there will be a Creativity award of $50 and a Winner award of $50. Parade entry forms are available on the Canton Main Street Association Facebook page and are on the City of Canton website at showmecanton.com
There will also be a number of holiday gift baskets being made available through a drawing. A variety of locations will offer tickets for the baskets and tickets will be offered the night of the parade until the drawing takes place at the end of the parade.

Frosty the Snowman will be shown at Lewis Street Playhouse during December as a short film ahead of their showings of The Polar Express.

People are encouraged to follow the Canton Main Street Association Facebook page for continued updates on the Parade of Lights activities.